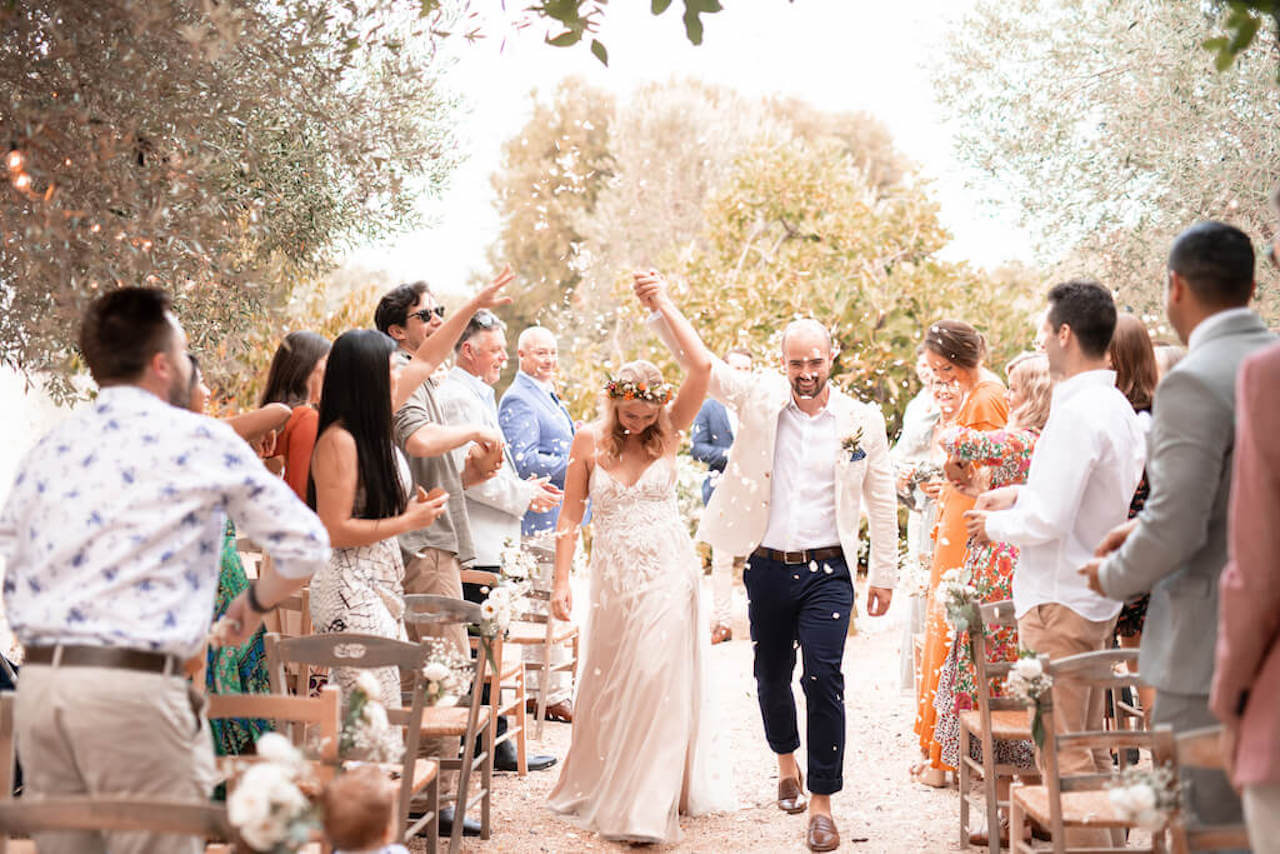 Stephanie and Jonathon’s All-White Wedding at Masseria Narducci and Ostuni in Puglia, Italy.

Letting the white washed town of Ostuni act as their source of inspiration for atmosphere and styling, Stephanie & Jonathan tied the knot in a perfectly restored historic farmhouse surrounded by the natural beauty of the olive groves.

Stephanie and Jonathan first crossed paths with one another in Australia; sparks flew between the two from the moment they met in a Bondi Beach Bar back in 2016. Jonathan, a Client Relations Manager from Portland, USA, and Creative Designer Stephanie from Sydney were reunited in a three-year love affair shortly after Jonathon’s return to Australia.

The couple had their hearts set on travelling the world together and it wasn’t long before they decided to get married in Italy. Stephanie and Jonathon didn’t need to venture any further than Puglia’s renowned rustic venue – Masseria Narducci for their celebration. The venue is located in the breathtakingly-beautiful town of Ostuni in Puglia, often referred to as ‘the white city’ and known for its authentic Italian charms.

The couple adored the sophistication of the venue and its ability to maintain a rural simplicity at the same time, it was the perfect spot for their stylish all–white Italian wedding. Ostuni is perched on a hilltop overlooking olive groves and stunning surroundings, the elevated positioning boasted dreamy views throughout the day.

The rustic theme of the wedding flowed through all the way to the florals along the aisle, which were paired with a rustic table adorned with natural fabric and two large-size candelabras. As Stephanie approached Jonathan, they both glowed with love as they listened to their dear friend who led and officiated the ceremony.

Wedding photographer Kayleigh Pope captured their emotions and memories from the day solidifying the unique and strong relationship that Stephanie and Jonathan share. The gorgeous beauty of the location was also photographed as the couple headed off to take their Italy wedding photos perched atop the hill and amongst the city’s locals. Both were stealing the show as they shared romantic moments against the white-washed landscape.

Wearing one of her own custom made A-line designs, Stephanie showcased her talent as a designer with her gorgeous dress perfectly paired with a bold colour floral crown that matched the vibrant bouquets held by her bridal party.

It was not long before the evening swapped exceptional dining to dancing and savoured dessert by the venue’s super pool. The day was indeed about two people coming together, surrounded by their nearest and dearest, making this event absolutely, Stephanie and Jonathon.

We hope that this beautiful Real Wedding story inspires you if you are getting married in Italy and offers you authentic wedding ideas. Feel free to browse our curated directory to discover local wedding vendors and beautiful wedding venues in Italy.