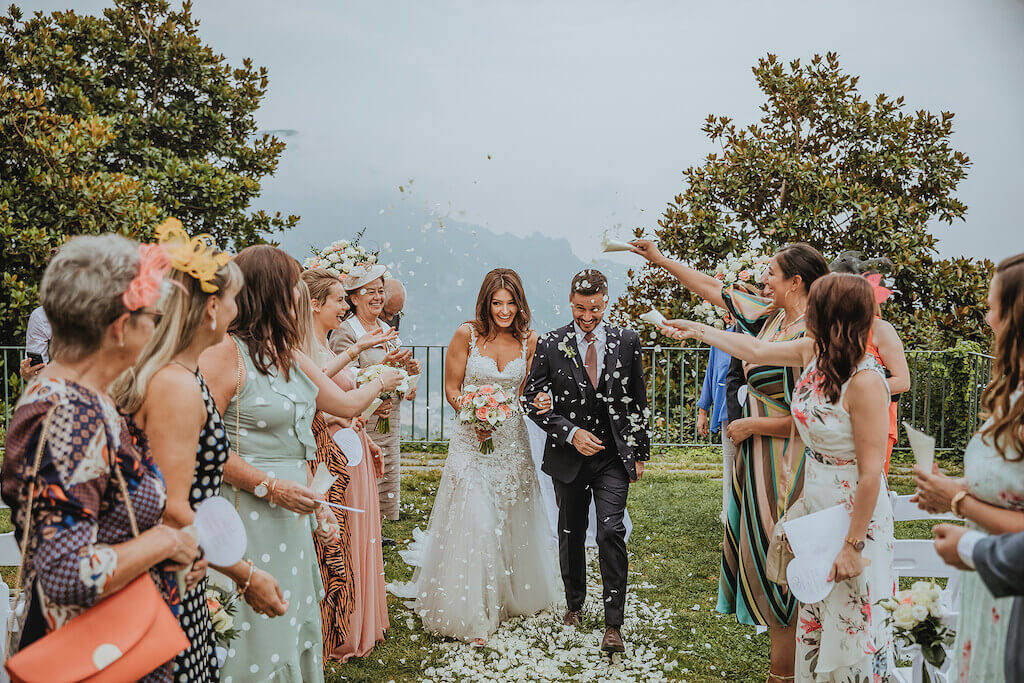 Natalia was a vision as she walked down the aisle in a mesmerising Pronovias dress, with her train gliding across the ground in Ravello, Italy, towards her groom, Jody Coleman.

For Jody, the romance began when he first saw Natalia from a distance while working, some twelve years ago, and he never forgot the vision that was Natalia. He then went on to move to another city but returned to Derby, where both the bride and groom are from, some years later, and it was then that their romance was cemented as they came together through a chance meet. The instant connection and attraction propelled the pair to get engaged on New Year’s Day in 2018 and to then get married and, paying homage to their shared adoration of Italy, it simply had to be on that soil that they said ‘I do.’

Natalia and Jody fell head over heels for Italy, which is why an Italy wedding was top of their list. They became transfixed by the country’s many alluring trademarks, from the quaint, idyllic streets and villages to the ferociously fine fare. However, above all, and perhaps most importantly, they fell in love with the romance which oozes out of Italy. So, on September 1st 2019, the couple married in the beautiful resort town of Ravello surrounded by a small gathering of friends and family, organised by expert wedding planners The Amalfi Experience.

Capturing the beauty of the occasion was photographer Giuseppe Grecco, who brought to life every detail of the celebration, from blushing bride Natalia getting ready for the big day, to candid moments of clinking glasses as loved ones toasted the newlyweds. After tying the knot at the picturesque Ravello Town Hall – Giardini Principessa Di Piemonte, the venue for their intimate Italy wedding was Villa Eva, a fairy tale location which stole the hearts of both Natalia and Jody at first glance. “We knew instantly that Villa Eva was the one," the couple explained.

Prior to settling on the splendid villa which boasts a late liberty style, the couple had explored various parts of Italy, from rural Tuscany and Lake Como, to Florence and then Rome. And while loving all of these transfixing gems when they wandered to Italy, it was always Ravello.

Villa Eva is one of the most beautiful wedding venues in Italy; a small jewel immersed in a vast 3000 square metre park of centenary trees and its attractive position allows for a 360-degree view of the coast below, too. The outdoor ceremony took place in an area protected by centenary plants and the beauty of stunning Ravello made for the backdrop of their wedding, with all of the sought-after trademarks of Italy, from its historic side to hauntingly beautiful clifftops and ocean in view. Flower petals marked the aisle at Giardini della Principessa di Piemonte and in her white wedding gown with stunning floral detail, Natalia met Jody at the altar, as an intimate gathering of 25 guests watched on as they exchanged their vows.

Jody looked effortlessly handsome in a suit from luxury store Brigdens as he waited for his bride, Natalia, at the altar. Natalia’s brown hair tumbled down past her shoulders in loose curls – the work of her Derby hair stylist Christopher Daniel from No. 10 Hair Salon. For makeup, the bride opted for talented Alessia Sirena, an Italian-based wedding make-up artist who provided Natalia with a stunning glow through the use of subtle makeup techniques and a soft coral lip. The bride held some perfectly colour-matched florals – crafted by Francesco Di Bianco II Fiorista based in Atrani – as she walked down the aisle. The gorgeous florals in soft pastel shades were also present on the dinner table, making for a very pretty setting, especially when coupled with the place cards fondly illustrated by Natalia’s mum.

After a beautiful ceremony, the couple walked together to the piazza to enjoy a glass of Prosecco with family and friends in tow; a moment Natalia and Jody deem as one of the highlights from their special day.

The group then joined together at Villa Eva for an intimate dinner at a long table outdoors, adorned with florals and lit by candelabras, before dancing into the early hours of the morning at the mesmerising venue to the soundtrack of female fronted soul, rock and pop band Solstice. Of course, no wedding is complete without a cake and the couple were evidently fond of their three-tiered offering, on which real flowers were draped, as they smiled and cut it together.

Natalia and Jody had always hoped for a small wedding and it was made all the more special having their nearest and dearest by their sides to share the magical moments of the day, with guests flying out to join from the UK. And, caught up in the beauty of Italy, a handful of guests decided to journey on after the wedding to explore the alluring nooks and crannies of the country – who can blame them?

While their guests explored the country, the newlyweds headed to Capri for a Mini Moon which saw their love for Italy extending to the pretty island in the Bay of Naples. One love which topped them all, however, was the love they had for each other as they journeyed on to their future as Natalia and Jody Coleman.

We hope that this beautiful Real Wedding story inspires you if you are getting married in Italy and offers you authentic wedding ideas. Feel free to browse our curated directory to discover local wedding vendors and beautiful wedding venues in Italy.